The Classical Era was dominated by three towering and influential composers: Joseph Haydn, Wolfgang Amadeus Mozart and Ludwig van Beethoven, the last of whom bridged the Classical and Romantic eras. In addition to Beethoven’s Symphony #5, probably the most famous classical piece of all time, many of the most-played works in the classical repertoire come from this period.

Roll over and/or click highlighted composers for larger image. 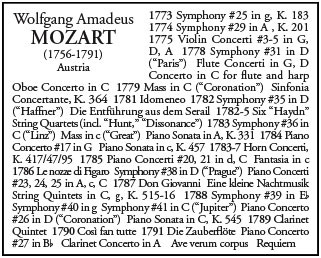