The Romantic Era was characterized by strong emotional content and storytelling, as composers strived for greater freedom and individuality of expression. The small classical orchestra expanded in size and virtuoso performers such as Niccolo Paganini and Franz Liszt became wildly popular. The era was also marked by nationalist elements in the works of such composers as Dvorak, Grieg and Smetana, and the ascendancy of opera, notably in the masterworks of Rossini, Verdi, Wagner and Puccini.

Roll over and/or click highlighted composers for larger image. 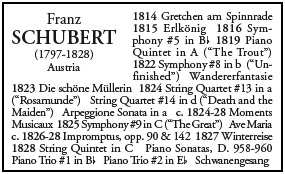